As the first in her immediate family to earn an undergraduate degree, Ozziesha Liburd plans to become a businesswoman.  With her a Bachelor of Arts Degree in Business Administration with a concentration in Marketing from the University of the Virgin Islands, Ozziesha has set forth the foundation for her future.

However, her path to finding her career path was not always clear. Earning a business degree wasn’t her first choice. Ozziesha enrolled in UVI as a biology major with plans of one day becoming an optometrist. Quickly realizing that a career in optometry may not be for her, she transitioned over into the School of Business where her love for marketing began.

“I took Introduction to Marketing with Dr. Lydia MacKenzie,” says Ozziesha, who was struggling to find something she was passionate about. “I loved it so much and I also loved Dr. McKenzie as a professor.” After changing her major 3 times from biology to business management and then accounting, Ozziesha finally settled on earning a degree in marketing.

Ozziesha remembers conducting hours of research, taking the lead in many group projects, and putting together a number of marketing plans and strategies. “It was really a lot of work, but I learned so much from those experiences,” she says. She also encouraged many of her peers and friends to take marketing classes.

In 2017, her life suddenly changed course. “My father fell ill, so I had move in order help take care of him,” says Ozziesha. She recalls how challenging it was trying to manage her course work online while also taking care of her father. “It was pretty hard, but I had a great support from my family, friends and professors.”

Staying committed to her academics, Ozziesha later returned to St. Thomas to continue her education in person. Her commitment towards her academics and a new love for marketing did not go unnoticed. Throughout her four years at UVI, Ozziesha maintained a spot on the Dean’s List and in 2019, she was inducted into the Golden Key International Honor Society.

Making the most of her college experience, Liburd attended the Thurgood Marshall College Fund Leadership Institute (TMCF) and also served as treasurer of Student Government Association. She remembers the excitement she felt when she discovered she would be attending the TMCF leadership institute. “I was so happy. I experienced so many wonderful things while at the leadership institute,” says Ozzeisha. She had the opportunity to interact with a number fortune 500 companies and interviewed with The Kellogg Company.

Excited to be graduating with the UVI Class of 2020, Ozziesha is looking forward to opening her own business. “I’m still trying to figure out that part of my life, but I feel much more confident in pursuing my goals. My time in the School of Business as a marketing major, I believe has prepared me well,” she says.

Ozziesha would like to encourage current students to not give up. “Don’t give up. There were points where I did not want to continue college, but I am happy I decided to persevere.”

“Our Hardest Struggles Results in the Greatest Rewards” 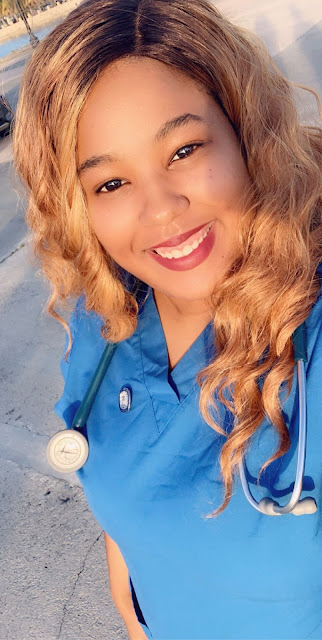 On Friday, Dec. 11, Tabitha Urgent will celebrate earning a Bachelor of Science Degree during an online ceremony. She will be in the third cohort of nursing students to receive their Bachelor in of Science in Nursing on the Albert A. Sheen Campus on St. Croix. “I always wanted to be a nurse and help people,” says Tabitha Urgent. “Since elementary school, I knew I wanted to be in the medical field.”
“When I was younger, I created a fake clinic with my Barbie dolls and teddy bears and acted as a nurse,” she recalls. Tabitha began her journey to become a nurse when she enrolled at the University in 2015. She excelled academically throughout her freshman, sophomore and junior years.
Her journey to become a registered nurse, was going smoothly, then tragedy struck. “In the fall of 2016, I lost my twin brother, that was the first traumatic experience for me,” she says. Despite this tragedy, Tabitha decided to continue to pursue her nursing degree. “Normally people would say take a break or take some time off,” says Tabitha. However, with a goal in mind she decided to persevere. “Losing my twin brother has been my motivation to continue school,” she adds.

Through hard work and dedication, Tabitha was accepted into the School of Nursing program and was on the Dean’s List for four consecutive semesters. She also received the title of ‘junior female with the highest G.P.A.’ or grade point average.

Classes were going very well, but in December of 2018 her life suddenly changed. Tabitha lost her mother as a result of a pulmonary embolism during heart surgery. “It was pretty bad. People told me to take a break, others questioned how I would be able to continue school, however; I returned to school in January. The nursing professors, Dean Lansiquot and everyone were so supportive,” she recalls.

“When I lost my mom, it was very hard. I remember how proud my mom used to be. Even though I was just a nursing student, she always told people, ‘my daughter is a nurse’,” Tabitha says.

While in the School of Nursing, Tabitha became a mentor for other nursing students where she encouraged and motivated them. “I always tried to be there for my classmates,” she says.

Earning her Bachelor of Science Degree in Nursing is a tribute to her mother and twin brother, Tabitha says.

Upon earning her degree, Tabitha successfully completed the National Council Licensure Examination or NCLEX-RN earning the title of registered nurse. “I am so grateful for the UVI Nursing program. The nursing program is a hard program, but it really prepares students,” she says.
With her childhood dream now a reality, Tabitha has decided to pursue a Master of Science in Nursing degree at Chamberlain University, with the hopes of becoming a family nurse practitioner. Tabitha wishes to gear her focus toward the field of mental health.

As living proof that anyone can accomplish their dreams, Tabitha encourages and motivates current nursing students to keep moving forward. “Don’t give up. If this is something you really want, you must work hard for it. There may be days where you’re crying or feeling hopeless, but I’ve learned that our hardest struggles result in the greatest rewards.”
Posted by UVI today... at 4:29 PM

Graduate’s Dream to Become a Doctor Soon to be Fulfilled

“Trust Your education. It Gave Me a Solid Foundation for Medical School” 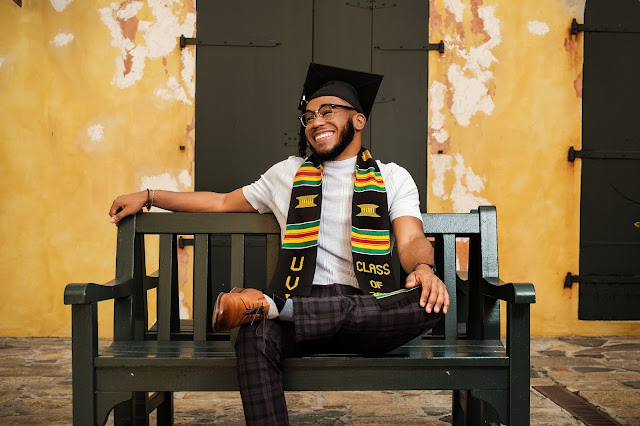 Micaiah Bully takes graduation photo
Micaiah Bully is graduating summa cum laude with a Bachelor of Science in Biology and a minor in Health Sciences from the University of the Virgin Islands. Micaiah is a first-year medical student at Boston University’s School of Medicine. He enrolled at UVI in the Fall of 2016, with the intention of being accepted into the University’s Boston School of Medicine’s Early Medical School Selection Program (EMSSP). The EMSSP is a partnership between Boston University and UVI that is designed to provide an early and decompressed transition into the medical school curriculum through provisional acceptance into medical school at the completion of two years of undergraduate study. With this goal in mind, he dedicated a lot of time towards his academics, earning him top scores in a number of his biology courses, being on the Dean’s List for eight consecutive semesters, the Barnett Frank ‘Best in Class Award’ for junior male with the highest GPA in 2017, the Senior Biology major award, and Outstanding Student in French Award.

Growing up on St. Thomas, Micaiah always had an interest in STEM, however he wasn’t quite sure what field of study would best suit him. It wasn’t until he attended the National Student Leadership Conference on Medicine and Healthcare when he was a student in high school that his passion for a career medicine was born. 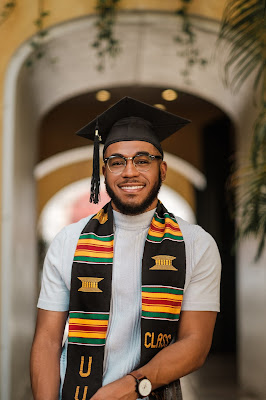 After completing his sophomore year, Micaiah applied for the Early Medical School Selection program. “The biology faculty and professors were very supportive throughout the application process,” says Micaiah. Doing mock interviews and being advised by faculty in the biology program helped him to better prepare, he says.
After weeks of preparation and three interviews later, all of which he recalls being nervous about, Micaiah received acceptance into the Early Medical School Selection Program. “Opening my acceptance letter was one of the happiest moments of my life,” he says. “Many consider getting into medical school one of the most challenging parts of becoming a physician, so it was a really big deal for me.”

Now on the right track to pursuing a career in medicine, Micaiah began spending his summers in Boston taking pre-med courses and preparing for the Medical College Admission Test (MCAT). “I spent the summer of last year studying for the MCAT. I studied for two months straight,” Micaiah recalls.

In September of last year Micaiah took the MCAT and received a perfect score. “I remember opening my results and, after seeing my score, there was just a feeling of relief. The MCAT is one of the biggest hurdles, so I was happy to have completed that requirement for matriculation,” he says. After completing graduate level courses at Boston University in his senior year, Micaiah successfully matriculated into Boston University’s School of Medicine.

Now as a first-year medical student, where is he is a part of a number of programs and organizations related to the field of medicine, Micaiah is anxiously looking forward to earning the title of Doctor of Medicine with the hopes of returning home and serving his Virgin Islands community. “I plan to relocate to St. Thomas and hopefully open a private practice, serving the community that I know and care for,” he says.

Micaiah thanks his family and friends for their unwavering support and the University. “UVI has done a great job in preparing me for medical school.” When asked what he would say to current students who are also aspiring physicians, Micaiah says to follow your dreams. “Have faith in the education that you are receiving because It will give you a solid foundation for medical school.”
Posted by UVI today... at 4:24 PM