﻿﻿﻿WUVI 1090 AM, the new student radio station at the University of the Virgin Islands, held its official grand opening at the WUVI studio in Penha House on the St. Thomas campus on Thursday, Jan. 24, 2013.

The station, which went live on Jan. 9, is on the air daily from 6 a.m. to 6 p.m. broadcasting from a 250-watt transmitter on St. Thomas. In addition to the Virgin Islands, the WUVI signal reaches from Dominica in the south, to Puerto Rico in the east. Plans for streaming it on the web are in the works. It features a wide range of programming focused on regional music, cultural events, and UVI and local news. It is designed to bring the intellectual content of the University to the people of the region.

UVI's Communication Department in the College of Liberal Arts and Social Sciences has oversight of WUVI. Dr. Alexander Randall serves as chairperson of UVI's Department of Music, Communication, Art and Theatre.

WUVI functions as part of UVI’s curriculum, allowing students to learn how to manage, operate and produce programming for a functioning radio station. WUVI’s radio frequency is being leased from WGOD for five years.
Posted by UVI today... at 5:21 PM

﻿﻿UVI showed its colors in the 2013 Martin Luther King, Jr. Day March held Jan. 21 on St. Croix. A total of 38 students and staff turned out for the UVI entry, sponsored by the Student Affairs and Student Activities offices. Organizers issued honorable mentions for participants Maria Friday representing UVI’s Delta M. Jackson Dorsch (residence) Complex, Fiola Alexander from the Agricultural Experiment Station, Sharyanne Garcia from the Center for Student Success and Junior Garcia representing Brothers with a Cause.
Posted by UVI today... at 4:22 PM 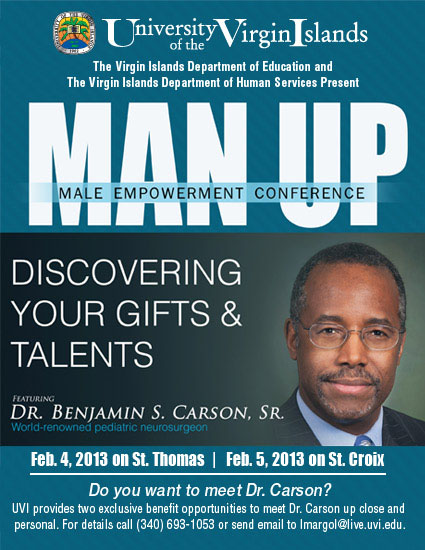 
UVI's world renowned aquaponics system is in the news again, this time in a National Public Radio report produced by WAMU, 88.5 FM, from American University Radio in Washington D.C. Reporter Sabri Ben-Achour's story features a Virginia man's catering company that includes an aquaponics garden – based on principles developed by UVI researchers – inside his warehouse. Included in the story is a brief interview with UVI Agricultural Experiment Station Research Specialist Don Bailey extolling the virtues of the system. The UVI program, has trained hundreds of people from around the world in the process. For more information, contact Bailey at dbailey@uvi.edu.

The text of the interview, as well as a link to hear the radio report, is featured on the WAMU website at this story link.


Four departments on UVI's St. Thomas campus – Security, Physical Plant, Student Housing and the Reichhold Center – are the beneficiaries of the recent donation of five golf carts by Mahogany Run Golf Course. The Campus Security Office has received two of the carts and has begun using them for regular patrols. The carts, which are gasoline powered, offer much better mileage than existing patrol vehicles. In the future they will be customized with security beacons and lighting for use at night. In addition to fuel efficiency, the carts provide greater flexibility and expanded access to many campus areas.

Mahogany Run General Manager Kristine Macken said the golf course has always been a supporter of the Virgin Islands community, and that education is a key part of that. "Although the contribution of the carts may not be the most traditional of gifts," Macken said, "it is our hope that the addition of the carts to UVI’s existing fleet will facilitate greater accessibility and increased security for students and staff alike.”
Posted by UVI today... at 9:27 AM

We Are UVI Contribution for Jan. 13 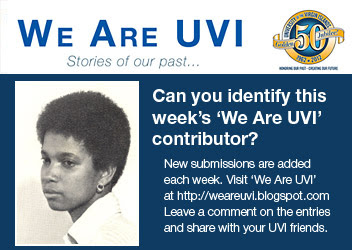 This submission was posted Sunday, Jan. 13, 2013, to UVI's Golden Jubilee blog. It joins more than 50 other stories from individuals with close ties to the University.

Do you know who this is? To see photos of this week’s “We Are UVI” contributor and read her story, visit http://weareuvi.blogspot.com/. “We Are UVI” is our Golden Jubilee blog. It features people sharing CVI/UVI stories from the past 50 years.
Posted by UVI today... at 1:00 AM

We Are UVI Contribution for Jan. 6 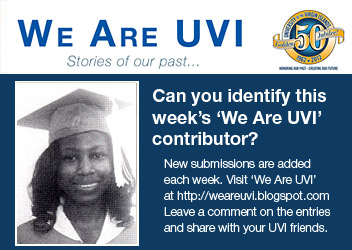 This submission was posted Sunday, Jan. 6, 2013, to UVI's Golden Jubilee blog. It joins more than 50 other stories from individuals with close ties to the University.

Do you know who this is? To see photos of this week’s “We Are UVI” contributor and read her story, visit http://weareuvi.blogspot.com/. “We Are UVI” is our Golden Jubilee blog. It features people sharing CVI/UVI stories from the past 50 years. A new submission is added each week.
Posted by UVI today... at 2:37 PM