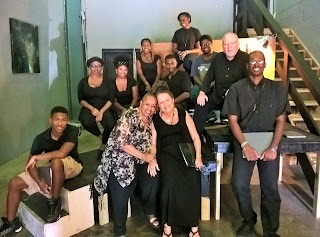 “The Playwrights in Paradise New Play Festival,” a month-long celebration of the arts featuring new and unproduced works is being celebrated at UVI. The festival began on March 22, with several 12 to 15 minute plays.  The Festival will continue at 6 p.m. on Friday, April 22, and at 1 p.m. on Saturday, April 23, at Seven.Minus.Seven Alternative Arts, located at the Lindberg Bay Warehouses, behind Boynes Gas Station.

The final event of the festival is at 1p.m. on Sunday, April 24. "Calling All Civil Rights Leaders" will be led by Julisa Marcel. 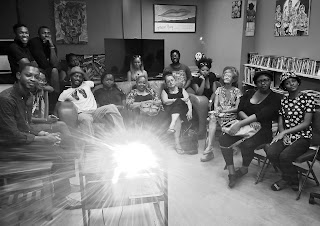 
The University of the Virgin Islands celebrated the 54th anniversary of its charter on Friday morning, March 18, with an inspiring program that showcased the talent, leadership and charisma that has made UVI one of the most successful Historically Black Colleges and Universities (HBCUs) in America. Themes of vision, excellence, and intrepidity dominated the event. Keynote speaker Johnny C. Taylor Jr., president and CEO of the Thurgood Marshall College Fund (TMCF), emphasized all of the above as he discussed the historic and future relevancy of HBCUs.

The event was teleconferenced between the St. Thomas Campus and the Albert A. Sheen Campus on St. Croix, so that the whole University could celebrate together. It was a morning to remember. From the warm welcome of a jubilant President David Hall to the fearless remarks of student speakers, to the electrifying music of the Steve Turre Jazz Quintet, to the candid, emboldening and often hilarious words of Taylor, UVI’s greatest asset – its community members – was on flamboyant display.
Charter Day is a way to not only remember, but to actually touch and embrace the spirit of the UVI’s founders by continuing to set bold and ambitious goals,” said Hall, who set the tone by recognizing the hard work, dedication and vision of those who brought the University into existence 54 years ago. By way of an illustration, he spoke of the five new business degree programs that will launch in the fall of 2017, emerging Ph.D. programs, newly established Innovation Center and of course the nascent medical school. “Charter Day is a reminder of our founders’ high aim,” he said.


Katherine Callwood, Miss UVI 2015-2016, echoed Dr. Hall’s sentiment by describing UVI as an elastic institution that has evolved from college to university to HBCU. “There is no doubt in my mind that our institution will continue to change with the times,” she said, adding that one of UVI’s greatest strengths lies in its flexibility; in its capacity to adapt to the constant resurfacing of the territory, America and the world.

Following a humorous creative word selection by a humanities student and an
earnest vocal selection by Ka’Reema Moses, President Hall introduced Johnny C. Taylor, Jr. as an attorney who left a successful legal practice to “… answer a call. By heading the Thurgood Marshall College Fund,” Hall said, “Taylor has become an unrelenting advocate for students at public HBCUs.”

Taylor began his remarks by praising the many new developments and innovations that are currently underway at the University of the Virgin Islands, and by congratulating President Hall for being awarded the TMCF leadership award. However, he said, while UVI appears to be expanding in a host of exciting ways, this has not been a trend among mainland HBCUs. Most public HBCUs are struggling just to survive, and some have been forced to close their doors. “I was reminded of the Dickens novel, ‘The Tale of Two Cities’,” Taylor said. “You all are experiencing the best of times down here in the Virgin Islands, while up in the states a lot of HBCUs are facing the worst of times. There used to be 117 HBCUs in America; there are now 105.”

Taylor attributed these difficulties to underfunding, unfavorable education policy, and competition. But the biggest problem, he said, is a lack of support from the very people for whom these institutions matter the most. “The problem isn’t that white folks aren’t supporting HBCUs,” he exclaimed. “The problem is that black folks aren’t supporting HBCUs.”

Taylor went on to report that only 10 percent of black college and university
students nationwide are choosing to attend HBCUs, and that as a result we may not be able to take for granted that public HBCUs will always exist, will always be able to ensure high quality education at affordable prices for people of all ethnicities. “We must celebrate the past, but think seriously about the future,” said Taylor. “If we don’t take pride in our own institutions, nobody else will.”

Thurgood Marshall College Fund student ambassador, Patrice Harris, spoke with precocious gravity and insight about her humbling experiences at the TMCF Leadership Institute. “There I was forced to let go of my sense of entitlement and embrace the hard work that would enable me to develop my own brand, maintain high standards, and negotiate an imperfect world without letting it wear me down,” she said. “I gained a tremendous amount of confidence.”

Harris’ St. Croix counterpart, TMCF student ambassador Zoe T.V. Walker, spoke
with comparable passion and grace about the enormity of the impact that both UVI and TMCF have had on her life. “Having a great support system on and off campus afforded me the opportunity to achieve excellence,” she said. Both Harris and Walker were effusive in their expressions of gratitude to TMCF for “… always believing in its students,” said Harris, “constantly looking for ways to increase opportunities for students of HBCUs, and for teaching us to take pride in our HBCUs.”

During a break between remarks, the ground floor conference room of the ACC erupted into a squall of jazz by the Steve Turre Quintet, which included percussionist Dion Parson who is currently an artist in residence at UVI. The dynamic performance, which featured virtuosic solos on trombone, trumpet, keyboards, drums and stand-up bass, climaxed with Turre’s signature conch shell performance in which he juggled shells of varying sizes, playing them with the same dexterity that he would apply to any traditional horn.

President Hall concluded the 54th Charter Day program by declaring it the “Best-Ever” Charter Day celebration in the history of UVI Charter Day celebrations. And while he acknowledged with his characteristically understated humor that the comment was mildly outrageous, it was clear that not a person in the room would have disagreed. As the conclusion of the Charter Day program gave way to the commencement of UVI’s Pride festivities, it was evident that members of the UVI community had gained a deeper and more nuanced appreciation for what it means to show, and genuinely feel, pride in its HBCU.
Posted by UVI today... at 3:50 PM

A few dozen walkers and runners, including past winners, repeat participants, students, faculty, staff and UVI alumni got up before sunrise on Friday, March 18, a work-day, to celebrate the founding of the University of the Virgin Islands and the 15th year of the UVI/Queen Mary 5K Walk Run.

The annual event, which is hosted by UVI and organized by the Virgin Islands Pace Runners, was held as part of the University’s first official event of its 13 day University Pride celebration.

Juan Robles decided early in the week to make it special and ran an unofficial race record of 15 minutes, 33 seconds on the point-to-point course that is slightly uphill.  So did Bridget Klein who broke her personal record of 20 minutes, 14 seconds, was the first overall female finisher, was the third overall winner with 19 minutes, 37 seconds, and now has the unofficial female race record.

Michelle Elliot, UVI business services supervisor, welcomed the finishers, a mix of local and visiting runners and walkers who for some reason, likes the challenge of the start on a work-day, in the dark.

The walk/run was the idea of co-founder Jenifer Jackson, former chancellor of UVI on St. Croix.

“The reason I picked the time and day was to make a special effort to get the public’s attention,” said Jackson, who was recognized at the annual award breakfast held following the event.  Wallace Williams, co-founder, said the Virgin Islands Pace Runners got its start at UVI back in 1978 with the UVI Cooperative Extension 4-H Program on the University’s St. Croix Campus in the exact spot for the finish line and awards presentation area for the UVI/Queen Mary 5K.

He said, “those who ran then, still do”, including Dr. Alan Lewit, UVI professor of Computer Science, who wrote the first computer program for results for V.I. Pace. Dr. Lewit was present on Friday. He thanked the University and the runners for maintaining the long relationship with the V.I. Pace Runners.