The future of agriculture in the Virgin Islands was on stage as the presidents of the Future Farmers of America (FFA) organizations on St. Thomas addressed the crowd at the opening ceremony of the 30th Annual St. Thomas-St. John Agriculture and Food Fair on Saturday, Nov. 16. Tressel Benjamin, from of the Charlotte Amalie High School Chapter, and Clemon Lewis from Ivanna Eudora Kean High School were on hand. Lewis also had the honor of cutting the ribbon officially opening the two-day fair.

Produce and livestock, and a wide variety of arts and crafts, were the focus of the 2013 St. Thomas/St. John Agriculture and Food Fair held on the grounds of UVI’s Reichhold Center for the Arts on St. Thomas. This year’s theme was "Celebrating our 30th – Investing in Nutrition and Good Health." St. Thomas farmers Cyril LaPlace and Charles Leonard were honored as the livestock and crop farmers of the year, respectively, for 2013. Leonard, one of St. Thomas' most successful farmers, also won the award last year. The winners in the fair's best tasting sweetbread contest were Senator Myron Jackson, who took first place, and Ellen Murraine who took second place.

The Rev. Dr. H. Beecher Hicks, Jr., servant pastor of the Metropolitan Baptist Church of Largo, Md., provided the keynote address at the the Seventh Annual National Conference on Health Disparities, scheduled for Nov. 13-16, at Sugar Bay Resort on St. Thomas. The University of the Virgin Islands was a major sponsor of the conference, which had the theme: “Reducing Health Disparities Through Sustaining and Strengthening Healthy Communities.” It focused on policies and programs designed to reduce the impact of health disparities, with panels addressing issues of particular importance in the Caribbean region.

University of the Virgin Islands President Dr. David Hall presented the Presidential Achievement Award to UVI Webmaster and Website Committee Chair Moneca Pinkett and to the UVI Website Committee on Oct. 26, during a UVI Board of Trustees meeting held on the Albert A. Sheen Campus on St. Croix.

The Website Committee was honored for the redesign of the UVI website. The responsive, user friendly website was launched in August. “Through a lot of hard work by a very committed committee, and through the leadership of our Webmaster Ms. Moneca Pinkett, we were able to redesign the website in nine months and the whole process not only met a presidential goal, but was done in an outstanding way,” said Dr. Hall.

The Presidential Achievement Award is given to an individual or group whose dedication and leadership have positively impacted the University. 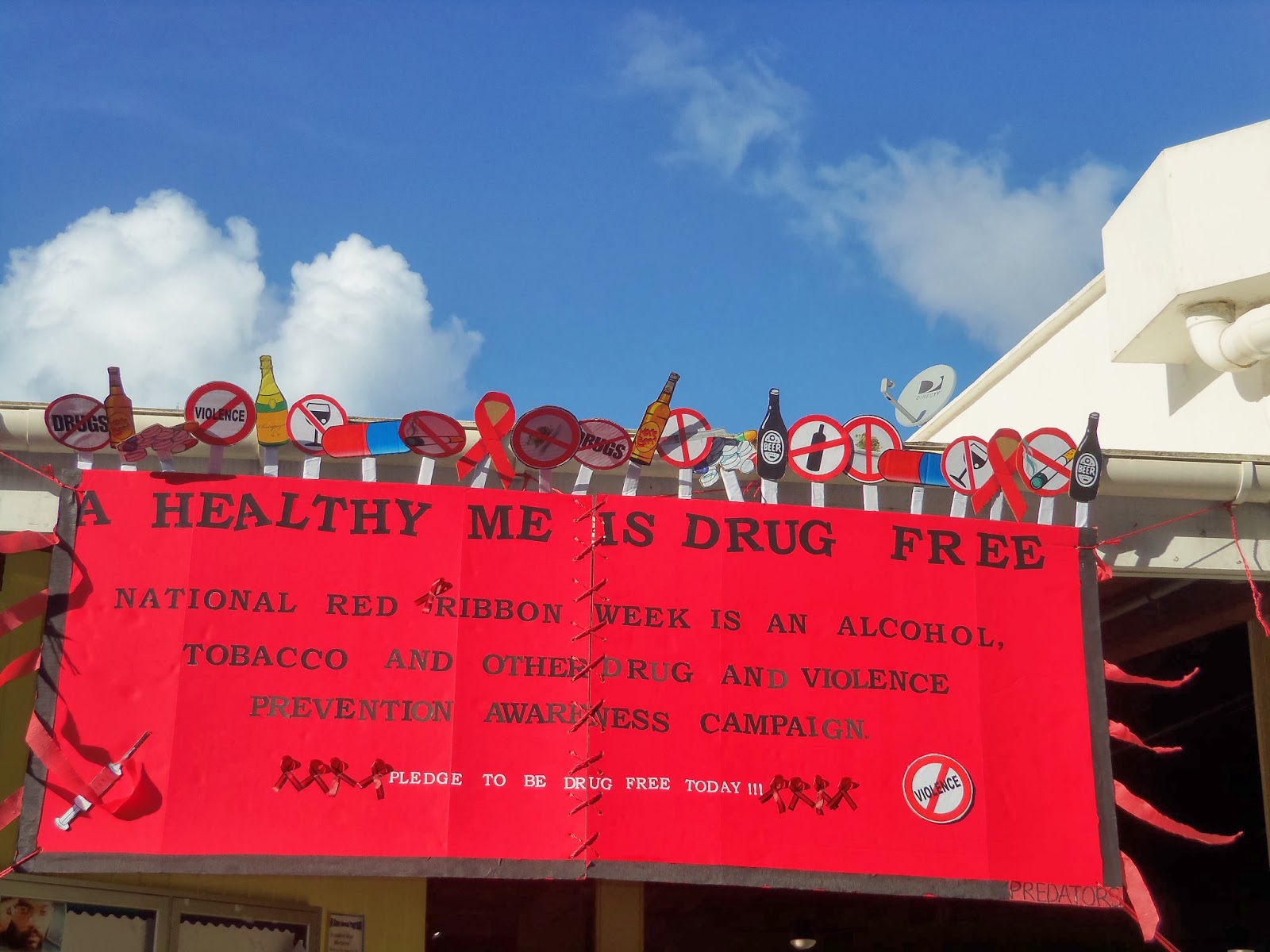 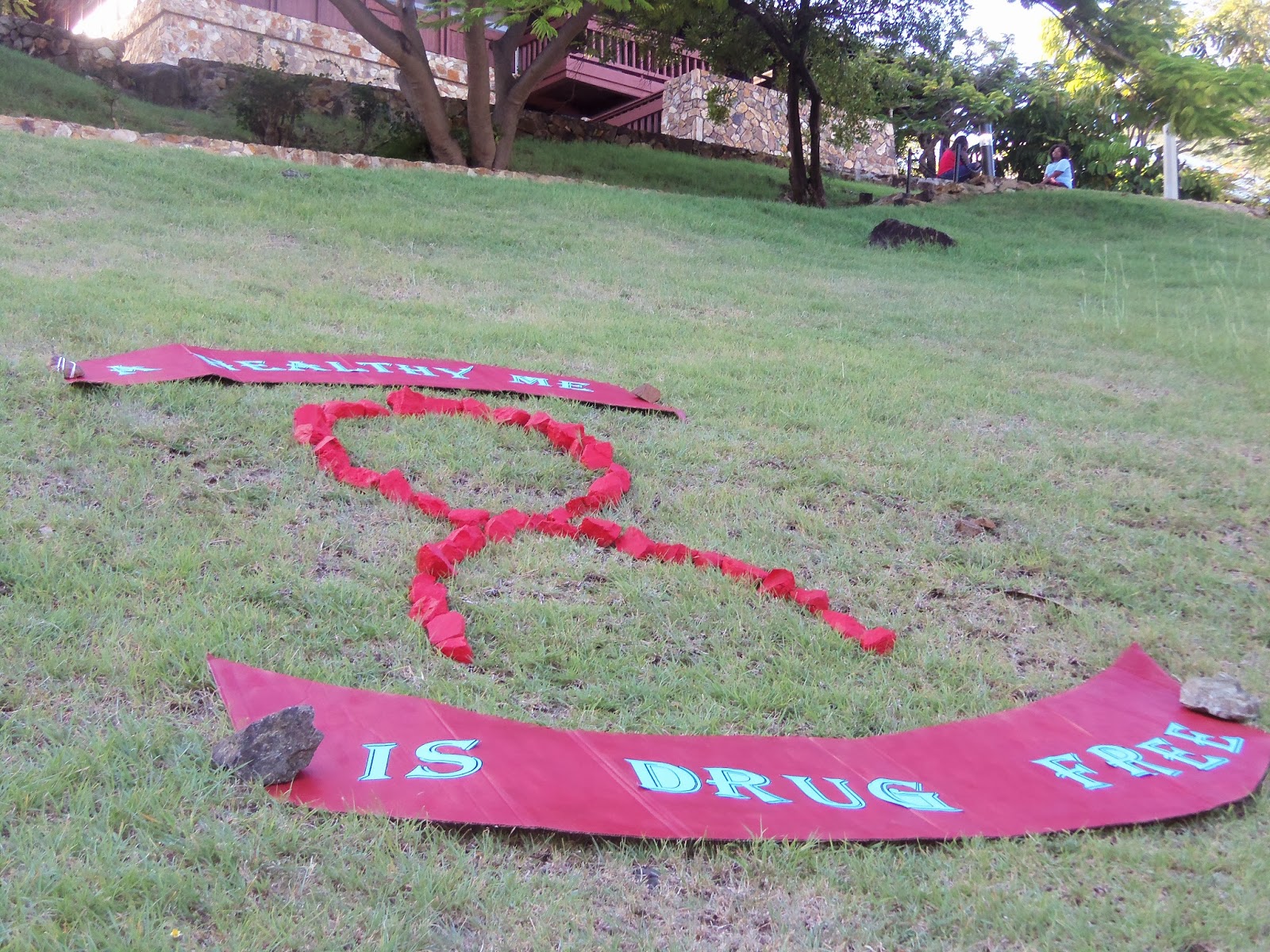 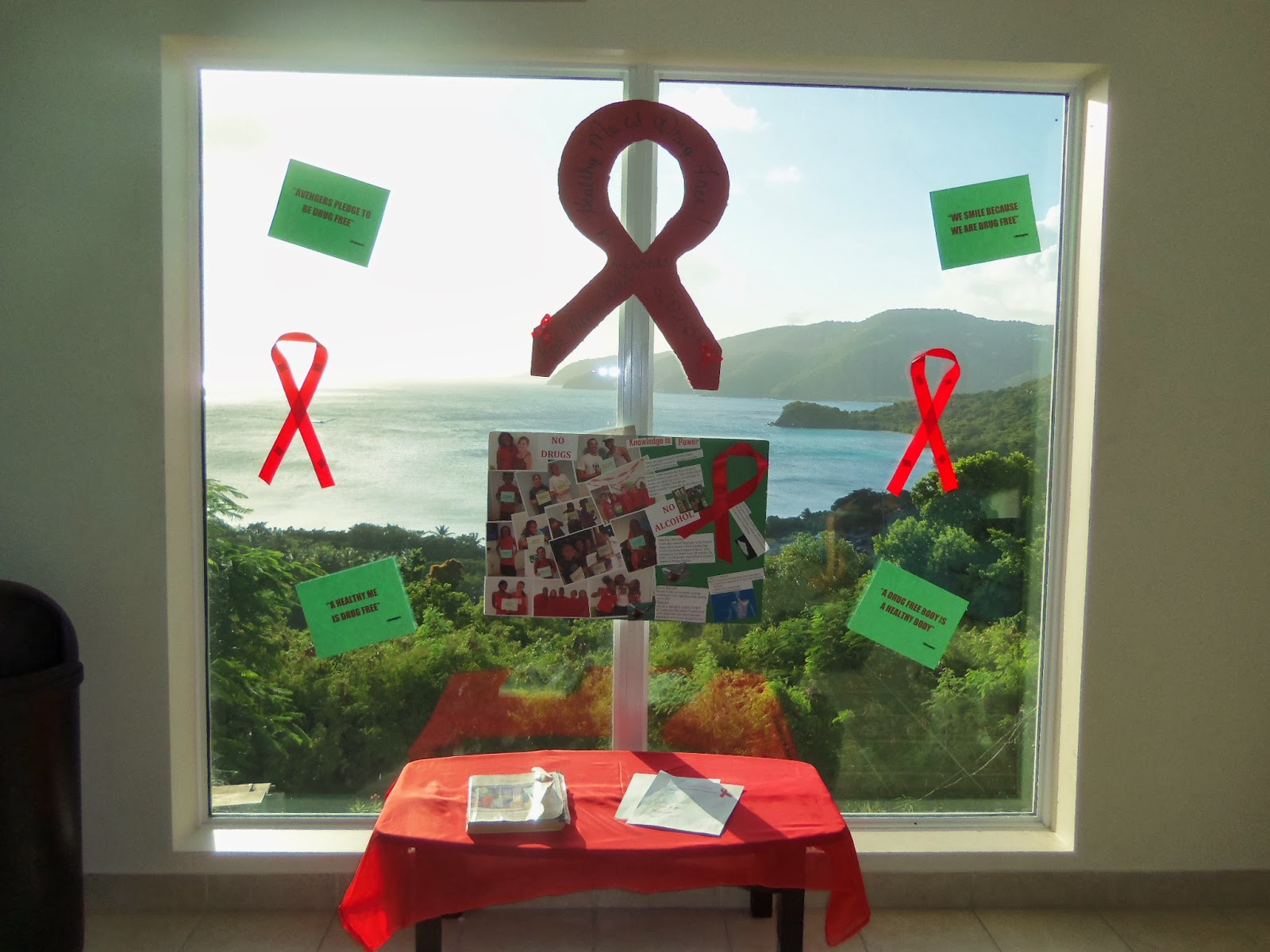 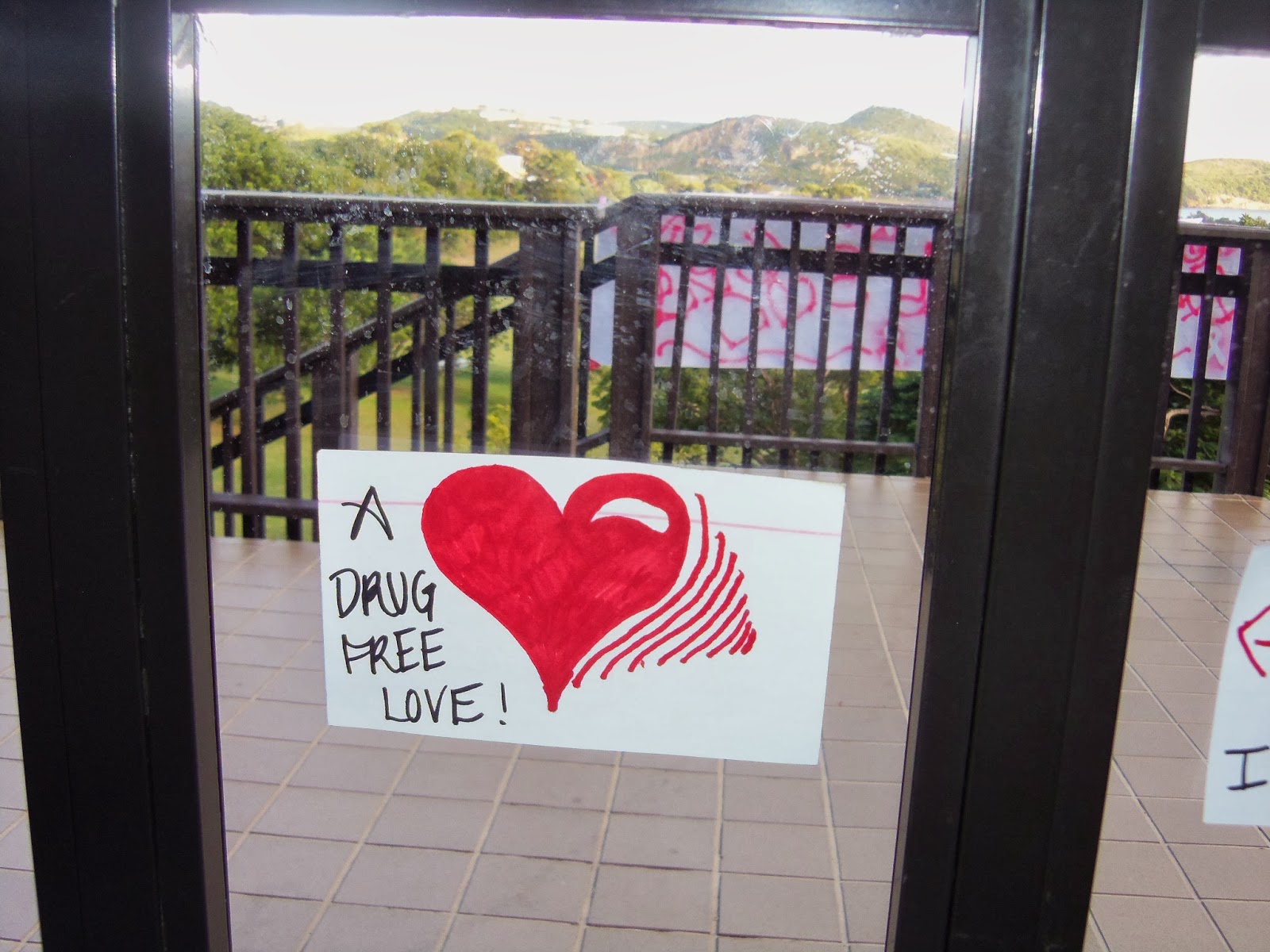 When University of the Virgin Islands junior Zenobia Howe returned to St. John and enrolled at UVI she was prepared to catch a 15 minute bus ride to Cruz Bay, take the 25 minute ferry ride to St. Thomas, and make her way from St. Thomas’ east end to the University’s St. Thomas Campus in the west.
However, Howe was pleased to discover that she did not have to. Nestled at the edge of Cruz Bay on the third floor of the Marketplace, is the UVI St. John Academic Center. This fall Howe is able to take all her classes at the center via teleconference. With four state-of-the-art interactive classrooms, computers, a lounge, study room, library, a program coordinator, librarian, and an information technology technician, Howe is able to attend classes without the commute.

On this fall day, Howe is catching up on her studies on a brightly colored sofa in the center’s lounge with her laptop propped up beside her. Although the lounge usually draws several students on a typical day, she is only sharing it with fellow student Irah Christian and UVI Academic Center Librarian Ashley Till. Howe says that the Academic Center staff is very helpful and knowledgeable. They assist with finding research materials, papers and with assignments. “It’s like a little study hall where everyone helps out everyone else,” she says. “We are all here almost every day. You get a very close knit relationship with everyone.” Howe says that she is not able to bond with her classmates after classes in the traditional sense, but does not feel left out either. She finds it easy to communicate her needs to professors via email.

Howe says that without the center she would not be able to work to support herself and attend classes full-time. “It is a pretty big deal to not have to go to St. Thomas every day,” she says. “I got to work. I have to pay rent.”

Howe is a communication major at UVI. She chose this field to raise awareness and open up minds. “I wanted to be a voice,” she says of the communications field. Instead of pursuing a career in media, she is considering becoming an entrepreneur. Currently, she is enrolled in a digital entrepreneurship class. Howe has been tasked with creating a website for an online business. “My website will be good by the end of the semester,” Howe says. “That is one of the classes I am really excited about.” She plans to create a one-stop shop for natural and holistic products and lifestyles. Howe has seen some sites that include natural products, but none have all products. “Everyone is going ecofriendly and green,” she says.

Recently, Howe was able to attend a 13D Entrepreneurship Lecture with featured speaker Dr. Dennis Kimbro, best-selling author on self-made millionaires. She attended via teleconference from the St. John Academic Center. Howe says she was inspired, motivated and empowered by his lecture. She plans to enter UVI’s 13D Entrepreneurship competition later this year. “Communications, I love it,” she says. “I am still going to keep up with it, but as I go forth I will use everything I learned to become an entrepreneur.”

UVI St. John Academic Center Program Coordinator Kent Wessinger has been working to ensure that operations at the center run smoothly for several years now. “It is rewarding in the fact that I am able to invest something significant into the community in which I live,” he says. “One of the main objectives is to remove a travel barrier and that is important to me. One of the things that the St. John Academic Center has been able to do is open an opportunity for students at UVI that ordinarily would not get the opportunity if this center was not here.”

Wessinger says that the technology at the Academic Center is at the highest level. “We have students from diverse backgrounds that are able to participate in our classroom experience that ordinarily would not be able to participate if the technology were not there,” he says. “A lot of single parents can’t make that commute over to the St. Thomas Campus because they have commitments to their children. So now they can participate in classes. They bring a level of maturity that was not there before.”

Wessinger says that the students in the center get personalized attention as the student body is smaller. Students receive assistance with their advisement, tutoring, and with life situations. “We see a high level of success with our students here,” says Wessinger. “Students want to be here. That level of engagement and relationship matters to the students.”

As the center’s librarian, Till provides academic support to students by teaching them how to access and navigate the library’s academic resources that are also available to students on the St. Thomas Campus and the Albert A. Sheen Campus on St. Croix. “They get their own personal librarian three days a week,” she says. Students receive tutoring, are assisted with research papers and get life skills, such as filling out resumes or writing letters for internships. Till says all librarians at UVI teach information literacy skills.

She believes the academic center is vital to the people of St. John. “It provides access for students that would not ordinarily have access,” Till says. “For a lot of students here, staying on campus is not an option.” Often students work or are non-traditional students.
Wessinger believes that the St. John Academic Center is the model for education going forward. “There are travel barriers and other barriers that exist in higher education,” he says. “If we can’t tailor education and models of education after our student body we put ourselves in a position where we isolate our students and we build walls and barriers against students that actually fortify our institutions.”

He believes UVI has implemented a model for higher education in the Caribbean. “We have the technology to make this happen throughout the Caribbean right here,” says Wessinger.
Posted by UVI today... at 7:51 PM