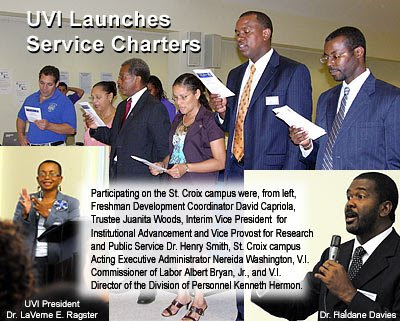 The University of the Virgin Islands officially launched a Service Charter program for 11 components and departments at a ceremony held simultaneously on both campuses on Friday, Sept. 19. Personnel from all UVI departments and components were joined at the sessions by a number of representatives from the Virgin Islands government, including Senate President Usie R. Richards, Sen. Louis Patrick Hill, Director of the V.I. Division of Personnel Kenneth Hermon, Commissioner of the Department of Labor Albert Bryan, Jr., Administrator for St. Thomas and St. John Barbara Petersen, Director of the Motor Vehicle Bureau Jerris Brown and V.I. National Guard Adjutant General Renaldo Rivera.
Posted by UVI today... at 3:26 PM 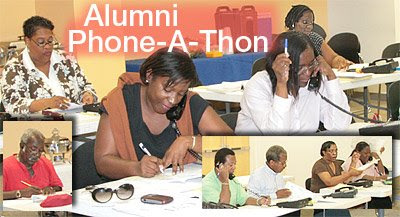 Scores of dedicated volunteers – students, alumni, faculty, staff and friends - spent the last week of August seeking the financial support of UVI alumni during the 2008 Alumni Phone-A-Thon. The goal is $25,000. Funds raised will be used to benefit many areas of the University, including several academic and enrichment programs. Dr. Henry Smith, UVI’s Interim Vice President for Institutional Advancement, expressed his profound thanks to the volunteers who participated and to the alumni who pledged their support to the University. Individuals who wish to participate can still make a pledge by calling (340) 693-1040.
Posted by UVI today... at 10:00 AM