UVI Voices of Inspiration Presents “A Musical Journey Through Time”

The University of the Virgin Islands (UVI) Voices of Inspiration is preparing to return to the stage in “A musical Journey Through Time” mega concert to be held on Saturday, November 3, 2018 at 7 p.m. at Island Center for the Performing Arts on St. Croix.

The compelling production, billed as a joyful musical concert will feature performances of soulful vocals, melodious sound and infectious energy.

The concert is free; however, donations are accepted. The Voices of Inspiration promises to give an unforgettable performance that is consistent with its track record. The concert will also feature special guest artistes, to include Gabrielle Denae, Oneyke, Tracee, Stanley and Ten Sleepless Knights, and Ay Ay Cultural Dancers.

This non-denominational choir sings a variety of music genres such as jazz, blues, negro spirituals, contemporary gospel, classical and Caribbean music, including reggae and calypso. Known as one of the Virgin Islands premier choirs, Voices of Inspiration is also known for its unique productions. Always bringing an added flare, the University’s choir is known for its performances that are enhanced with creative animation, visual graphics and dance.

The renowned choir comprises students, alumni and staff of the University of the Virgin Islands.
Voices of Inspiration began in 1999 when a group of resident assistants and residential students sought an outlet to express their musical talents. They came together to sing and fellowship. They were the first Residence Hall Choir. This expression of students’ talents, skills, and desires would later be called the Voices of Inspiration.

As the founding students graduated, the choir became dormant. However, with “Inspiration,” the group resurfaced to provide comfort and cause to a group of students who responded to the tragedy which occurred in Haiti in 2010.

Since its revival, the group has been wowing crowds in the Virgin Islands and abroad.

“What I experienced at the Spring concert was something that was just breathtaking,” Dr. Hall said. “It was one of the most fantastic performances not only I’ve seen here, but at any university that I have attended,” he said, speaking of the 2012 Spring concert.

“It was a combination of drama, music, digital performances and the Great Hall was transformed into a big theatre and I was just really blown away.”

Under the tutelage of Josephine Thomas-Lewis, who has directed the choir since August 2012, the choir’s performances have been exceeding expectations.

“I am totally pleased with the reception that the choir, affectionately called VOI has received over the past six years,” said choir director, Josephine Thomas-Lewis.

“This combined group of students, alumni, and community members have touched and impacted the lives of many within the Caribbean and some parts of the mainland.”

In 2013, the choir has performed at the Reichhold Center for the Arts in St. Thomas.

In 2016, the choir traveled to St. Kitts and performed at both the Calvary Baptist Tabernacle Church and the St. Kitts Marriott Resort.

Also, as recent as March 2018, the choir hosted a concert in Miami, Florida.

In 2017, challenges incurred by Hurricanes Irma and Maria derailed the groups plans to travel to London. The choir was expected to travel from November 9 – 19, where they would have participated in the 2017 Festival of Choirs Competition and other musical performances. While there, they would have hosted two concerts, perform at local churches and other venues, and conduct workshops. The choir has rescheduled the London trip to summer of 2019.

The UVI Voices of Inspiration suggests that you stay tuned for more stellar productions in the near future.

“In Lieu of our annual Christmas Production, we are planning a Gala which is slated for December 3, 2018, in the Great Hall on the Albert A. Sheen Campus on St. Croix,” said Thomas-Lewis.

“Our fundraising goal for this Gala is $50,000. This will allow us to produce a CD, to fund our service and annual empowerment initiatives, and support our travel to London in summer 2019.”

The training program is an extension of the annual 4-week marine science-based summer program, the Youth Ocean Explorers Summer Program held this past August.

“We are adamant about finding ways to continue education for the YOE students post program. One such way is to engage students through scuba classes,” said YOE Project Director, Howard Forbes Jr.

A second set of five students are expected to complete their open water certification by the end of October, 2018 bringing the total to 12 Virgin Islands students who will have received their certifications through the YOE Summer Program.

The scuba diving program which enables student to dive up to 60 feet is facilitated by the Coki Dive Shop.

As many of these students are interested in some aspect of marine science, the organizers of the Youth of Ocean Explorers (YOE) program have since been involving the students in various activities that have enabled them to continue to use their new skills.

“I personally believe that this opportunity will help to give them an advantage especially when trying to apply for internships and colleges in their related fields,” Forbes said.

Students have since been involved with the Coki Point cleanup which consisted of both a land and underwater based clean-up. Students attended the clean-up and assisted with the removal of underwater debris such as lawn chairs.

Through a collaborative effort with the V.I. Reef Response program, students will be diving to Flat Cay and assisting with the general maintenance of the coral nursery there.

The V.I. Reef Response program is an initiative of the Virgin Islands Experimental Program to Stimulate Competitive Research (VI-EPSCOR). Through this program a partnership has been established with local dive shops to recruit divers (both local and visiting) to assist with the maintenance of the coral nurseries.

“This is an amazing opportunity for the students as it is something that many Virgin Islanders don’t get an opportunity to do, said YOE Program Coordinator, Javon Stout.

“This would provide youths of the Virgin Islands with opportunities to be considered for certain jobs such as underwater construction and marine operations that typically, due to their inability to swim or scuba they would otherwise not be considered for.”

The VIMAS coordinated program aims to remove the stigma and fear associated with the ocean by getting the youth acquainted with the ocean at an earlier age and thereby exposing them to the endless amount of opportunities that are available in the marine industry.

The Program is of no charge to participants. However, interested students must be medically cleared for diving and will be required to complete a swimming test prior to their enrollment.

The program is sponsored in part by Community Foundation of the Virgin Islands (CFVI) and Saltchuk, parent company of Tropical Shipping.

For more information about the Scuba Diving Program, contact Howard Forbes Jr. at  340-693-1672 or email howard.forbes@live.uvi.edu.

A group of students, staff, alumni and friends embarked on an exciting travel-learning tour of South Africa on May 25 to June 8, as part of UVI’s Passport to the World Travel-Learning Program.

The twenty-four-member contingent spent the first week in Johannesburg and the second week in Cape Town. In both cities, participants gained an in-depth understanding of South Africa's history, pre and post the Apartheid regime.

To do so, they need to step out of their comfort zones and see the world.

"At UVI, we want our students, faculty, and staff to be well-rounded, to be global citizens,” said Camille McKayle, Provost and Vice President for Academic Affairs. “UVI Passport to the World Travel-Learning Program to South Africa provided an opportunity for participants to make those connections between our culture and that of South Africa in many ways"

In Johannesburg, the group visited the Apartheid Museum, the home of Nelson Mandela in the South Western Township (SOWETO) as well as the Hector Peterson museum. 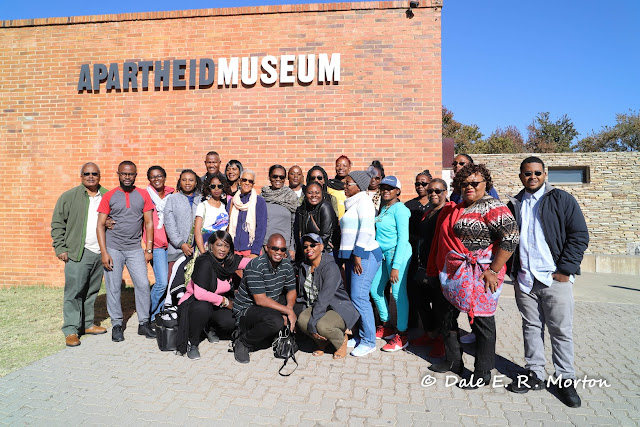 The attendees partook in a cultural immersion experience which included visits to the Lesedi Cultural Village on the outskirts of Johannesburg where they learned about the different tribal cultures that contribute to South Africa being known as the "Rainbow Nation".

UVI’s visiting contingent also had the opportunity to visit non-governmental agencies such as the Johannesburg Development Agency; local business ECONET, a telecommunications and technology company; and institutions of higher learning within the Johannesburg area. 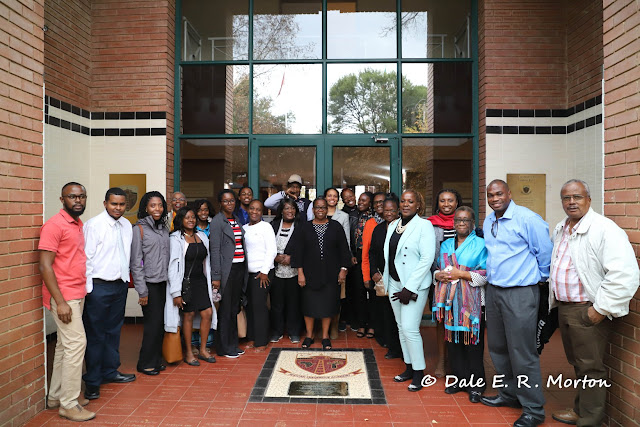 The second week of the program was spent in Cape Town where participants were able to enjoy and experience Table Mountain—one of the 7-wonders of nature. A steep cable ride up the mountain revealed picturesque views of the city of Cape Town. 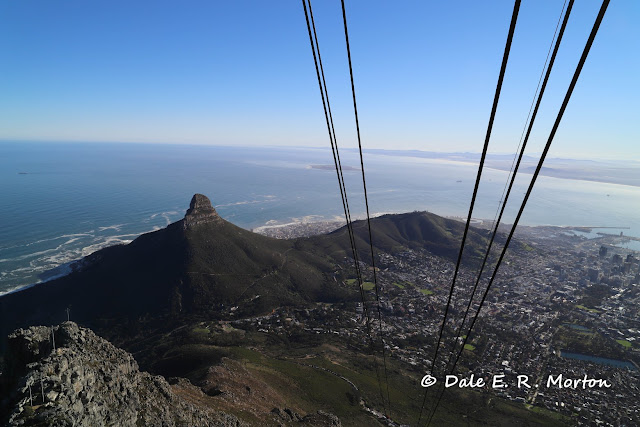 While in Cape Town, the group continued its exploration of South Africa's unique history by visiting Robben Island, the island which housed the prison of its name in which Nelson Mandela spent 18 of his 27 years of imprisonment. 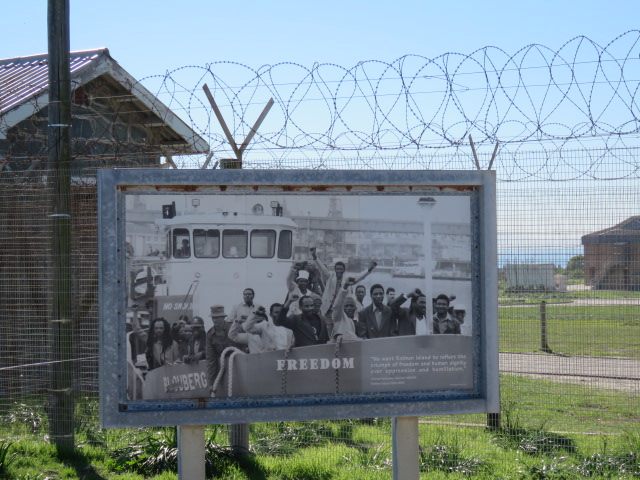 The group had the chance to speak with one of the former prisoners who served with Nelson Mandela—Sparks, who related his experience and that of the over 500 prisoners who endured hard labor on the island. A tour of the inside of the prison allowed participants to visit the actual prison cell in which Mandela spent his time. 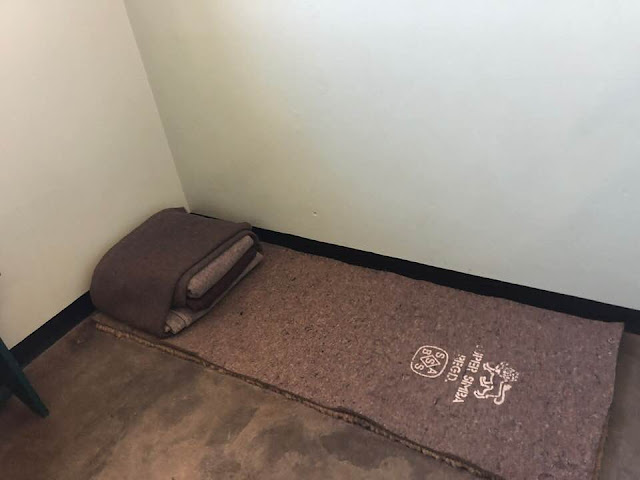 They also visited the District 6 Museum where they interacted with a colored man who was forcefully removed from the area by the South African Apartheid government in the 1960's.

For UVI Alumnus and doctoral student, Rick Grant the trip to South Africa wasn’t only about learning about the country’s rich history and past., Rick is most proud to have shared his recently published children’s book, "When I Grow Up" to a group of children in Cape Town. 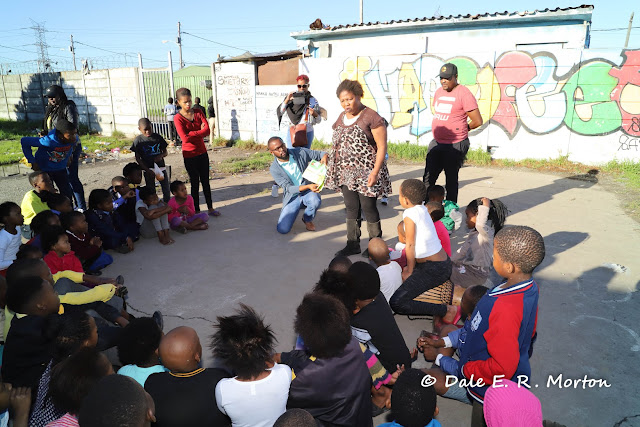 “As a mentor, author and educator, my interest was being able to give back to
a local group of children,” said Rick. “Being provided the opportunity to engage and encourage children, read my own book and leave copies with the native South African children of the Happy Feet after school program was the most impactful takeaway for me.”

Akeem McKintosh, UVI alumnus and staff member describes the trip as an awesome opportunity and a great experience that deepened his love and understanding for African history and culture.

“I enjoyed visiting the various museums and Robben Island, getting a detailed lesson in South African History,” McKintosh said.  “Gaining a deeper understanding of the Apartheid system and the struggles of South Africans added much more context to the music of Lucky Dube. It was easily one of the most memorable days of the trip, I enjoyed getting up- close and personal, having heart to heart conversations with many local South Africans.” 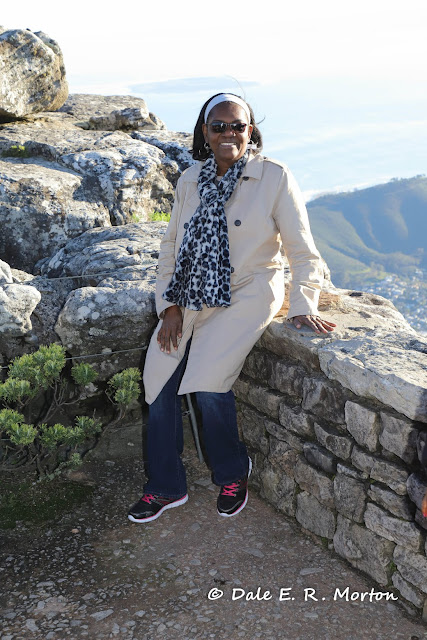 “This is a really great program that the University has embarked upon in order to
open the eyes of its students, faculty, staff and alumni so that they may be able to
experience other cultures outside of our immediate Caribbean area,” said Freeman. “It is really great for people who would normally not have the opportunity to travel to those areas on their own, to do so in a group setting.”

The UVI Passport to the World Travel-Learning program is housed in the Office of the Provost and was created in 2015 with a goal to bring UVI to the world. This experiential learning opportunity fuses education, culture, and recreation to create a culturally immersive experience for participants. In the past, the program has included travel to China and India.

UVI's Passport to the World Educational Travel Program partnered with World Strides, with it’s over 50 years of experience in organizing travel-learning experiences, to provide this capstone program.

The program is opened to UVI students, staff, faculty, and alumni and takes place annually. The program for 2019 is currently being developed.
Posted by UVI today... at 11:09 AM