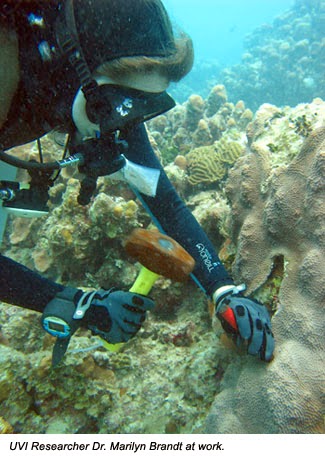 
Doctoral degrees are closer to reality for University of the Virgin Islands Science, Technology, Engineering and Mathematics (STEM) graduates than their national counterparts. Estimates are that nationally only 50 percent of students who start Ph.D. programs in the sciences complete their degrees. UVI data shows that 88 percent of the students in the Minority Access to Research Careers program that start working on a Ph.D. complete that degree. In 2013, five UVI STEM alumni have completed Ph.D.’s.

Long term data shows that 14 percent of UVI’s Bachelor of Science graduates in the fields of biology and chemistry complete Ph.D. degrees. Approximately 13 percent of these graduates complete medical degrees. Others complete masters degrees, degrees in pharmacy, dentistry and other fields.


“It feels wonderful to have a high rate of alumni obtaining Ph.D. degrees from highly competitive doctoral programs,” said Dr. Teresa Turner, UVI marine biology professor. “The fact that UVI alumni can be so successful speaks to the high quality of the UVI undergraduate experience.”


“I am proud of UVI’s alumni,” said Dr. Turner. “They conduct research that has an impact on the territory, the nation, and the world. Many alumni are conducting research in areas including coral reefs, fisheries, HIV, stem cells, eye diseases, immunology, neuroscience and the use of computer science techniques to gain information from medical records.”


“UVI encourages its graduates to seek higher degrees,” she said. “Our goal is to prepare our students for leadership positions in the Virgin Islands, nationally, and internationally. We would love to have a higher percentage of the faculty at UVI be UVI graduates. These alumni provide role models for our students.”


So far at least two of UVI’s recent alumni have granted her wish. Dr. Yakini Brandy (‘07) earned a bachelor’s of science in chemistry from UVI. She went on to earn a Ph.D. in chemistry from Howard University in 2012 and is currently employed at UVI as a chemist. Dr. Bertrum Foster, assistant professor of mathematics, returned to UVI this spring as a faculty member.


In an effort to inspire undergraduate students to earn graduate degrees, alumni are urged to come back to the territory to share their research experience. Dr. Shana Augustin, a neurophysiologist, returned to the University as part of the Emerging Caribbean Scientist’s research seminar series in September of 2013. She shared the process, insights and results of the Parkinson’s disease research she is conducting at the University of Chicago. The title of Dr. Augustin’s seminar was “Cyclic AMP and Afferent Activity Govern Bidirectional Synaptic Plasticity in Striatopallidal Neurons.”


Dr. Turner said that earning a doctoral degree trains students to become leaders in research and policy. There are many advantages for students who earn Ph.D.’s:


· Ph.D. holders can work in government, in industry, in universities or become entrepreneurs.

· In the sciences, tuition is waived in doctoral programs and students are paid for the research they conduct.
Posted by UVI today... at 9:35 AM