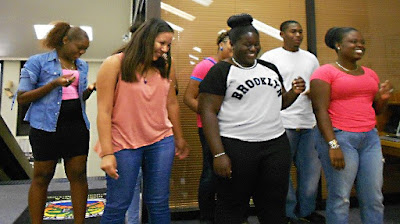 “Welcome to a callaloo of expression,” was the opening statement to University of the Virgin Islands’ 2015 “UVI Got Talent, Speak Up” poetry slam. The occasion was held to celebrate the art of literary expression in one of its most profound forms - poetry. Over 36 people attended, including staff, students, and visitors, all with the same interest at heart. The event kicked off with an enchanting rendition of the popular Negro spiritual “Go Down Moses,” performed by the English 100 morning class, in honor of poetry’s African American roots.

After its predecessor, the English 100 afternoon class did not disappoint with their thought-provoking deliverance of “What is Poetry?” by Nikki Giovanni. Richard Schrader, a Caribbean author, shared haiku poems from his book “A leaf in the wind” and students followed reading their dekaaz. During the brief open mic session, students and staff recited some of their own pieces. “Speak Up” concluded with a closing poem by student, Rennetta Lewis. 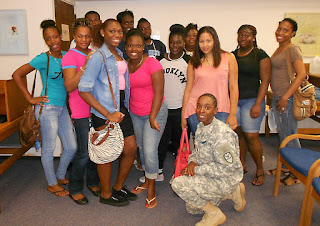 Fourteen University of the Virgin Islands students, representing the largest contingent in the University’s history, attended the 2015 Emerging Researchers National (ERN) Conference in Science, Technology, Engineering and Mathematics (STEM,) in Spring 2015 in Washington D.C. The UVI students from the College of Science and Mathematics were also accompanied by six faculty members.

UVI student poster presentations at the ERN Conference displayed the results of research projects students were engaged in during summer research experiences at UVI and abroad. “Our students were selected along with hundreds of other students from across the country to present posters after a competitive application process in which they submitted a scientific abstract for approval,” said Aimee Sanchez of the UVI Emerging Caribbean Scientists (ECS) Programs. “It is the largest group ever to participate and represent UVI in history.”

The objectives of the ERN conference are to help undergraduate and graduate students to enhance their science communication skills and to better understand how to prepare for science careers in a global workforce. The conference is aimed at college and university students.

Two UVI students, Rafael Almonte and Jamar Liburd, received awards for their outstanding poster presentation after a rigorous review process from judges at the conference. Liburd won first place in the category of nanoscience and physics for his presentation titled “Swift Observations of the Recent X‐ray Activity of Eta Carinae.” The research for his presentation was part of his summer research experience conducted at the National Aeronautics and Space Administration (NASA) Goddard Institute for Space Studies with Dr. David Morris, director of the UVI Etelman Observatory and assistant professor of physics. Rafael won first place in the category of Technology and Engineering for his presentation titled, “Testing of a Narrow Gap Detector Designed for a Sensitive X‐ray Polarimeter.” Rafael was also mentored by Dr. Morris at the NASA Goddard Institute.

Attendance to the conference is funded through National Science Foundation (NSF) programs. Several students also received travel awards from the American Association for the Advancement of Science (AAAS) and UVI sponsored the rest through funding from the NSF Historically Black Colleges and Universities Undergraduate Program grant.

Other student presentations at the 2015 ERN Conference include:

· Lorne Joseph “Spectroscopic Elucidation of the Equilibria Involving Pyridine and Its

Analogues with Cobaloximes in Various Solvents.”

between Commercial and Fresh Herbs.”