Linda Smith is not easily intimidated. She would tell anyone in a heartbeat that she lives for challenges. “I am very analytical, yet strategic,” said UVI’s director of Alumni Affairs and Annual Giving, qualities to which she credits her corporate background and a quality education from her alma mater UVI.

But in June when Smith sat alone at the hotel restaurant in Jackson Mississippi, where she had gone to represent UVI at the Annual Historically Black Colleges and Universities Awards, intimidation crept in – although just for a little while. She saw as university after university rolled up to the hotel with large entourages. A fleet of three or so minivans pulled up to the hotel and out jumped a group of men from Morgan University. They were all fully branded in Morgan University’s gear. 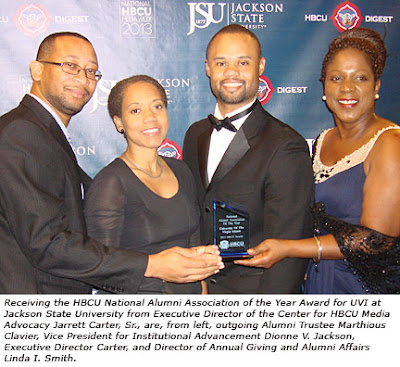 “I was like ‘Oh! That’s Morgan!'" Smith said. Right behind them another fleet rolled up. It was from Spelman College. “I was like ‘Oh my gosh,’” Smith said. “I was sitting in the restaurant alone – just me and my one UVI alumni pin.” UVI was up for the Alumni Association of the Year award. Other nominees in that category included Spelman College, Morgan University, Tuskegee University and Winston-Salem State University. “When I saw the teams from the much larger and older schools, I never thought we would win,” Smith said. Feeling outnumbered and overpowered, Smith retreated to her room and said a prayer. After praying, a calm came over her – it was the same calm that she experienced many times before when alumni would bless the alumni donation box, in hopes of creating a miracle for what seemed an impossible goal.

By the night of the award banquet at Jackson State University, Smith was calm, collected and confident. She was joined by UVI’s Vice President for Institutional Advancement Dionne Jackson and former Alumni Trustee Marthious Clavier. UVI won the award. “It’s an honor just to see we were able to be in this category, to come up against these other schools  – and win!” Smith said. “I never thought it would get to the point where presidents from other institutions would approach me and want to have a private audience with me about what was the secret to our success,” Smith said. They were asking “how can we have our own miracle?” 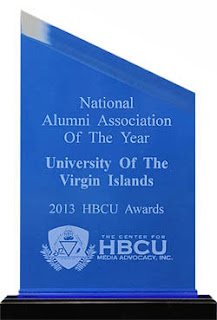 “Miracle” was the term UVI President David Hall used to describe what occurred in 2012 when he issued a call to UVI alumni to raise their giving rate from 13 percent to 50 percent in honor of the institution’s 50th anniversary.

Smith vividly recalls the day Dr. Hall asked her thoughts about the challenge. Dr. Hall walked into Smith’s St. Croix office unannounced. Her initial thought was that Dr. Hall, who had switched office space with Smith a year before, wanted his office back.

“He sat down and asked how things were going,” Smith remembered of the day in November 2011. “I briefly told him how things were going,” she said. Then Dr. Hall told her that he would like her to consider a 50 percent alumni giving rate for UVI’s 50th anniversary Golden Jubilee year. Smith didn’t bat an eye when she responded to the president: “I will do my best.”

“I knew that there was no other HBCU that had achieved this number,” Smith recalled. She had just completed research on the alumni giving rates of other institutions and was told by counsel that a 50 percent alumni giving rate was “virtually impossible.” “I knew the possibility of getting it done would be difficult,” Smith divulged. But she was determined to. “I just looked at the positives.”

“I will do my best,” the promise that Smith made to the president, meant that she was up for the challenge.  “It was time for us to change our strategy,” Smith said of her first step.

In January 2012 UVI launched the “50 for 50” alumni giving campaign that challenged UVI alumni to collectively raise the alumni giving rate to 50 percent. Changing the strategy worked. Smith, who runs a small office, mobilized volunteer-driven committees and campaigns. When the fiscal year closed, in nine months UVI had raised its alumni giving rate to 42 percent. It was not the 50 percent UVI aimed for, but it was an increase of astounding 223 percent.

"This was a major challenge, and I'm delighted by the outcome,” said Attorney Sam Hall, UVI alumnus and “50 for 50” fundraising campaign chair. “My fellow UVI alumni stepped up in a big way and I am confident we will all continue giving back to the University," he said.

UVI celebrated its success and Smith was presented with Dr. Hall’s quarterly President’s Award in October 2012. “I thought that was the end of it there,” Smith said. Then in December, after a particularly challenging day, Smith was laying in her bed when an e-mail came through on her iPad. “It was an e-mail from President Hall,” she recalled. It contained an editorial titled, “The Virgin Islands Miracle” that Dr. Hall wanted her to read before it was distributed. It captured the essence of what happened over the past nine months that resulted in the 42 percent alumni giving rate. “I immediately felt recharged and reenergized,” she recalled.

“Miracles do happen,” President Hall wrote. “They happen when people are given a challenge, and when we use our creativity and people to stretch beyond the norm and create a new normal. Miracles can happen in under-resourced universities when faith overrides fear; when the challenge is more enticing than the circumstances that consume us.”

The “miracle” and the resulting media attention it received helped UVI to secure the win of the “Alumni Association of the Year” award. All of the nominees for Alumni Association of the Year earned media coverage for social, political and financial support for their university or experienced increased giving, alumni membership or campus support. UVI was selected the winner by a secret ballot of 13 HBCU presidents.

“UVI should regard this award as a high honor, and hopefully, as a sign that they are an example of excellence and achievement within the HBCU community,” said Jarrett Carter, Sr. the founder and executive director of the Center for HBCU Media Advocacy, which hosts the annual awards.  “What UVI has accomplished is no small feat for any college, historically black, traditionally white, or otherwise. The UVI community should be proud that the university is a global leader in alumni relations and engagement, and will soon be teaching other institutions about how to achieve the same goal,” Carter continued.

Everyone agreed that UVI alumni outdid themselves. “They stepped up and answered the call,” Jackson said. “This would not have been possible without their willingness to respond to the challenge and give back to their alma mater.”

Smith added that everyone had a role to play in UVI’s success. “This distinguished honor is the people’s award,” she said. “The whole village took part in this award.” She also credited the campaign’s success to a higher power. “A divine force played an integral part of our success,” Smith said. “That was also part of the miracle.”

Being nationally recognized has created a desire in Smith to continue to rise to the challenge. This year’s campaign is “First to 50” where UVI is challenging its alumni to become the first HBCU with a 50 percent alumni giving rate. Smith is up to the challenge. “We just never stopped. And we will never stop,” she said.