An innovative new strategy has been formed against drunk driving and it’s all compliments of a group of tech savvy University of the Virgin Islands (UVI) students.

During the recent 2015 Hackfest held on the St. Thomas campus, a four-member team took home the award for “Best Hack”—and $500—for developing a telephone app titled “Cup Check.” The app features methods to monitor alcohol consumption with the goal of keeping drunk drivers off the roads. Members of the winning team were Sean R. Benjamin, Jr., Keturah Bethel, Shaquan Lewis, and Daricia Wilkinson.

The challenge was daunting. Under the theme “problem solved” students were asked to develop a technological solution to an everyday problem in the Virgin Islands.

Wilkinson, says the problem of drunk driving was paramount with her group. “It was a long process coming up with the idea,” Wilkinson says. “We kept thinking how could we be innovative? How could we make this stand out?”

Wilkinson is tightlipped about the specifics of the app, since it is currently in development. But, she offers, “Essentially, the app monitors how much you drink to prevent you from getting drunk. It can calculate your consumption and your blood alcohol level.” 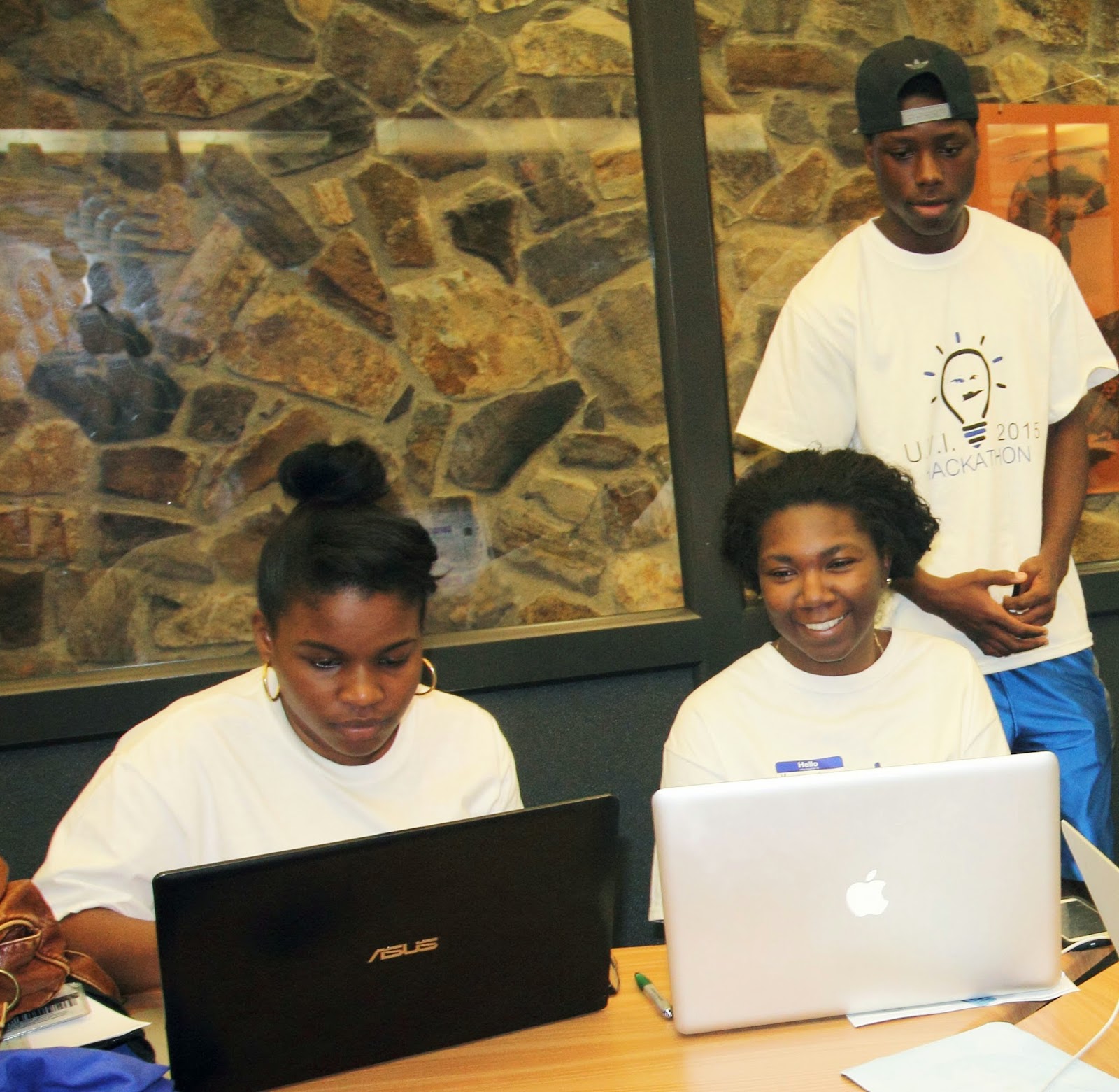 “Cup Check” may soon be coming to a phone near you. Wilkinson says sponsoring company NEARiX LLC will help her team develop “Cup Check” into an actual telephone application. NEARiX is a St. Croix-based technology and software development company.

For 24 hours Feb 6 and 7, the UVI Library was transformed into a think tank as students worked in teams, huddled around computers brainstorming ideas. Coffee and energy drinks became a staple of the night as teams rushed to create a winning project during a tight deadline.

“The competition was great because we basically had six and a half hours to come up with an idea for an app that would be impactful. We used up about two of those hours deliberating on the idea itself,” Lewis says. “Then it was crunch time after lunch when we were busy putting the details together, finalizing the visual presentation and prepping for the oral presentation.” He adds, “It was wonderful to see how the thought process of my team was flowing, and the level of deep thinking we used in putting the features of the app in place.”

Bethel is Vice President of UVIDEA, the student club that organized Hackfest. “The competition itself was a game changer. I was extremely pleased that students were willing and excited to participate,” Bethel says. “It made me realize that the University of the Virgin Islands is no underdog. We are taking a step in the right direction and moving rapidly. It was a little nerve-wracking though, because no one wants to be that team that has nothing to show after seven hours!”

The most “Innovative Hack” was awarded to team members Jason Baron, Nichole Etienne, Denny Smith and Leon Wheeler for their “Plant-O-Gram” telephone app. The app uses photo recognition technology to identify plants and communicate their health value to the community.

The Hackathon will be an annual event for UVI with the next one being held on the Albert A. Sheen Campus on St. Croix.

As for the $500 cash prize, Wilkinson said her team chose to donate the money back to the UVIDEA club as a way to support their ongoing work.

Bethel wholeheartedly supports that action. “As Vice President of UVIDEA, I am elated to be initiating change alongside my teammates. We as a student body have longed for an upgrade in technology and more experience. UVIDEA's goal is to create an environment of innovative and entrepreneurial minds. By first eliciting a change in our students, we are carving out a better future and building a stronger foundation for our territory.”