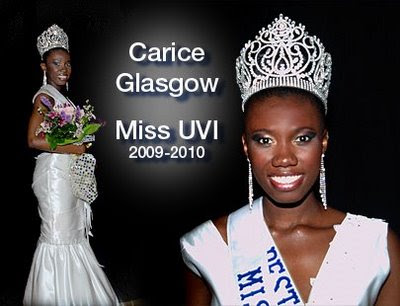 In a history-making pageant, UVI sophomore Carice Glasgow, a computer science major, was crowned Miss UVI 2009-2010 at the Miss UVI Ambassadorial Competition held March 28, 2009. Glasgow's win marks the first time that a student enrolled on the St. Croix campus won the title. The competition's first runner up was JaeDee Caines. The second runner up was Christina Clement, who also won the Most Popular and Miss Congeniality titles. The pageant took place before a standing-room only crowd at the Cafetorium on UVI's St. Croix campus.